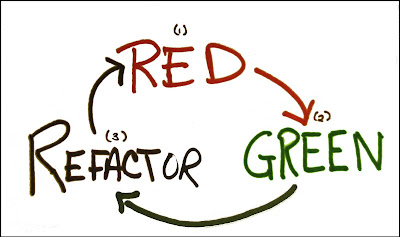 We show flash cards to students in order to help them completely ingrain a concept, to the point where they don't think about something, they just know it. The classic flash card presents a student with a vocabulary word or a math expression for which we expect almost immediate recognition and response. I show you the Spanish vocabulary word "acuario" and you blurt out "fish tank!"

So, red-green-refactor. By definition, TDD says write the tests first. They should fail, since you've not built the functionality that the tests specify, and a GUI test tool will show red at this point. That's useful feedback that tells you to write just enough code to get all existing tests to pass; the GUI test tool shows us green. Finally, you can ensure that the code has an optimal design during a refactoring step, since you have tests to give you the confidence to change things. Spend a few minutes, improve the design, and re-run your tests, which should all still be green. The entire cycle should take about 5 minutes on average, and no more than 10 minutes.

If you've been doing TDD for more than a few days--I mean really doing it and not writing code first and then sneaking in a few tests afterward and then telling people "I got muh TDD's done"--this cycle should be starting to sink in. Those of us who've done TDD a little longer--maybe a few months--don't think twice about it. Red-green-refactor feels like the natural way for us to build software.