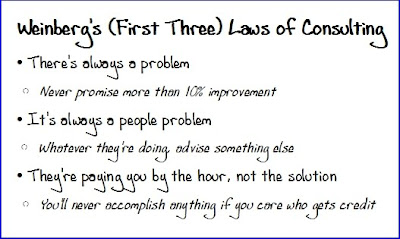 I re-read Gerald Weinberg's book The Secrets of Consulting (Dorset House, 1985) once every year or two. The first time I read it, about a dozen years ago, half of it seemed obvious while the other half seemed counter-intuitive. But I discovered that I too often ignored its obvious advice (i.e. "common sense"), and that its counter-intuitive advice is spot on.

Weinberg spills so many secrets ("give away your best ideas" being one of them) that it seems unfortunate to mention only the first three (and their corollaries), but getting past these is key to understanding the rest. And yes, I highly recommend getting a copy of the book so that you can discover the rest of the secrets, even if you don't consider yourself a consultant. Substitute "problem solver" or "agile coach" for "consultant," and most of the book will apply equally well (except perhaps the parts about marketing and pricing).

I actually lost a potential new client because of my inattention to the first law, or more specifically to its corollary. After having a phone conversation about the client's interest in transitioning to XP (this was about 5 years ago, when people still uttered the term XP), I met with the leadership team at their offices. On the phone, the person looking to bring me in talked about some of the serious challenges they had. But when I arrived, I heard little about these serious problems, only some vague notions that they wanted to improve how they did things.

Never mind, I was too wrapped up in my grandiose scheme to solve all problems for them using XP. I mentioned the challenges I had heard about on the phone, and indicated that I'd be able to help them fix it all. "What makes you think we have such serious problems?" Oops!

What Weinberg points out is that it's very difficult for us to admit it when we have serious problems. I didn't get the gig, because were I to have waltzed in and solved many large problems, it would have been far too embarrassing for the people in that room. Since then, I've promised as much improvement as their pride is willing to admit--per Jerry, 10%. (Of course, there's nothing that says you can't deliver more, as long as you are cautious about who gets the credit--see rule #3). Just last week, I found the rule to be dearly applicable in my personal life.

As far as the second law is concerned, we all tend to follow comfortable patterns, and this is often the cause of the problem: Once you're in a rut, it can be hard to get out. "We've always done things this way, that's just the way it has to be." The trick for a consultant is to help someone get out of a rut--which requires a change in direction--without themselves starting to fall into the same rut. You don't want to stay in one place too long as a consultant.

Some people have found Weinberg's "secrets of consulting" to be nothing short of greedy and cynical. They suggest the third law is all about taking as much money as possible from the client on an hourly basis. But Weinberg points out that this notion of not getting paid by the solution hearkens back to the first law: A solution expensive enough to require a consultant requires a problem too big to admit. Is it cynical to work in a manner that meshes realistically with normal human behavior? I don't think so.

I hadn't looked at The Secrets of Consulting in about two years. That's evidence of the rut I was tracking in. I've recently been shoved out of my rut, and I am thankful that someone reminded me (with the utmost subtlety) to revisit the book. I'm looking forward to re-amplifying my impact!