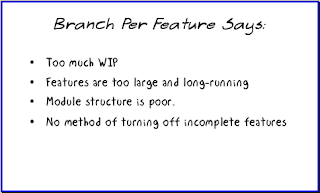 Branch-per-feature is a common SCM strategy in which a branch is created on a central server for each feature that is under development. As a feature is completed, the branch is integrated back into the main development code line.

In some organizations, releases are composed by merging selected, completed features together. This seems quite rational, and can be made to work with enough effort applied in bursts. Every merge creates a unique, new configuration in the system that must be tested for side effects. If the merge has unintended consequences, then one or more features must be modified or the release re-composed without it. As a result, releases become major events in the life of the company with huge testing parties and great schedule risk. These times are frequently called "hell week" or "hell month" depending on the release periodicity.

In addition, the more two lines of code diverge, the harder it is to reconcile their changes. When work is integrated several times a day, it tends to be a fairly trivial effort. When it is integrated only a few times per month, it is rather harder. A few times a year, and it is surprisingly difficult. Likewise, if many branches are held for a long time, each branch will not only diverge from the main codeline but from other branches as well. This effect can make it rather difficult to estimate the effort of integrating branches, which contributes to the nervousness around hell week.

Agile teams integrate continually with great ease and success. Why, then, do some organizations hail branch-per-feature? Teams that use branch-per-feature as regular practice are often compelled to do so because they don't know which tasks/stories will actually be completed by the end of the sprint. It seems easier to hedge bets with version control systems than to tackle the organizational/political problems that frustrate planning and execution of sprints.