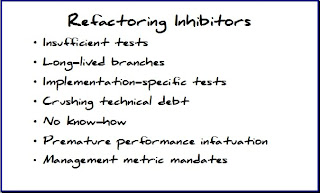 Refactoring is perhaps the most significant part of sustaining a system in an agile environment. Entropy in a system is reality: Code degrades unless you make strong efforts to stave off the degradation. You need good controls (tests) that provide rapid feedback in order to effectively keep a system clean. If the system attains a state where its design is poor, maintenance costs can become an order of magnitude larger. This can happen more rapidly than you think.

Agile can exacerbate poor practice. You don't do a lot of up-front design, and you constantly add new features that were not pre-conceived in an original comprehensive design. Repeatedly forcing features into a design will result in a disaster unless you have a means of righting the design over time. That's what refactoring is about.

With the need to avoid degradation, it's important to recognize anything that might prevent a team from refactoring as much as they must. This card provides some inhibitors to refactoring that you should watch for.