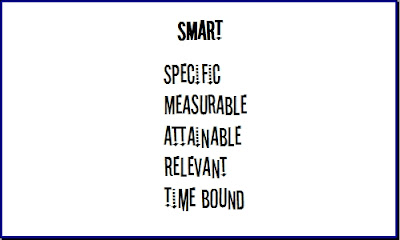 The best lists never die. The SMART mnemonic has been around for at least half a century, per Wikipedia. SMART is similar to INVEST, evaluating criteria for goals and objectives instead of for stories.

SMART has generated many different word expansions over the years. Sometimes M is meaningful, manageable, or even motivational(!). Our Agile in a Flash card uses the supposedly preferred words. But as a result of this inconsistency, I struggled yesterday to recall the best choice for the letter R. "Realistic?" No, that's too close in meaning to attainable. A quick search revealed relevant (duh!). I supplanted my mild self-annoyance (at my inability to remember the better choice) with elation at the prospect for a new, relevant agile card!

In the context of agile, I've found SMART goals to be useful when discussing action items to come out of retrospectives. True, there's no reason these couldn't be treated just like INVEST stories. But I've found that selling something half-a-century-tried-and-true can be a little easier with some crowds.

Here are my thoughts about the relevance of the SMART criteria with respect to retrospectives.