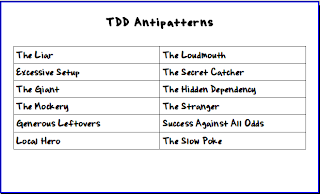 James Carr enlisted a group of fellow travelers to define a list of TDD Antipatterns, errors in judgement common in TDD practice. He provided an initial list for us to base our work on, and did a very fine job of filtering out the duplicates and near-duplicates, providing catchy names, and writing up the result. Note that his list is longer than ours since we have a terseness constraint. Read the full list.

I wish I had thought of it first.

Tim recommends that readers follow the link to the original article, which covers more territory than the index card can allow.