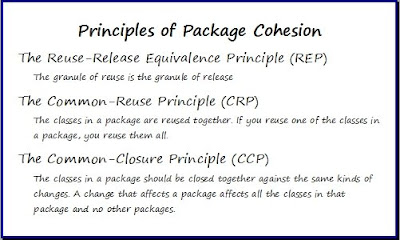 Coupling and cohesion are the two most important principles guiding the quality of an object-oriented class design. Most programmers learned about these principles in their first week of exposure to OO. The rise of TDD has helped reinforce the value of low coupling and high cohesion (although many programmers still unconsciously and even consciously resist truly small, cohesive classes and methods).

Uncle Bob teaches us that these core OO principles apply equally to packages. The Agile in a Flash card for Principles of Package Coupling covers the dependency side of the dynamic duo--how do you structure packages so as to improve the coupling relationships between them? This card covers the other side--how should you compose a package? What is the definition of "cohesive," as it applies to packages?

The principles of package cohesion are not absolute. Sometimes a packaging may satisfy all three principles at once, but often the principles represent competing principles. The development team will have to make trade-offs in order to find a balance that works. In general, smaller (and even smaller) packages provide the best chance for adherence to the CCP and CRP principles, although the REP says there is a limit to how small you will want to go.

Following these principles will require occasional re-packaging, which is upsetting to many users. However, correcting less-than-optimal packaging is a single deep cut that can halt the "death of a thousand paper cuts" caused when changes ripple across packages, or when users of a package have to deal with frequent irrelevant updates.