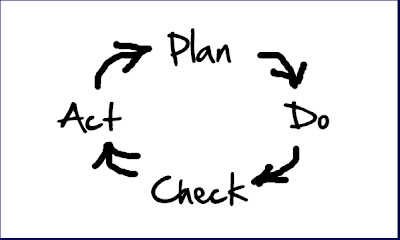 Thanks to Igor Czechowski for suggesting this card.

At the core of agile is short cycles of Plan-Do-Check-Act (PDCA). These steps are also what it means to be scientific in approach, at least per the definition of science that says you are following the scientific method: hypothesize, experiment, evaluate. Those who say agile isn't disciplined have not made this connection.

Plan-Do-Check-Act is echoed in agile practices, particularly TDD. The Plan step is about "making the expected output the focus," per Wikipedia. Writing a test that first fails captures your plan. After observing test failure, Do means you write enough code to make the test pass, and Check tells you to verify the actual results against the expected output. If there are differences you must Act to determine their cause and correct your implementation (or sometimes your expectations). In any case, you must also Act by observing the changes to the environment--the rest of the system--and "determine where to apply changes that will include improvement," which can mean some doing some incremental refactoring.

The iterative-incremental development core of agile also follows the cycle:

As with many of the best modern ideas for quality control, PDCA in part comes from Dr. W. Edwards Deming. While Deming credited Walter Shewhart for the original concept of PDCA, Deming gets credit for popularizing the cycle.