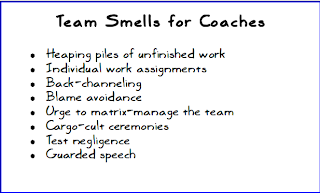 Every agile coach will have a number of factors they monitor constantly. Many are barely aware of the "smells" they are looking for, but will have a constant awareness of issues that indicate that a transition is not progressing well. We provide a short list of common smells that indicate your agile project is not going as well as you hoped: