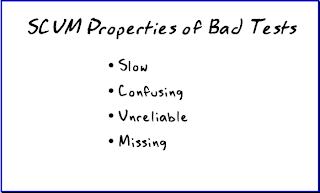 Font is "Pen of Truth"

Source is Ben Rady and Rod Coffin of Improving Works, given in an agile presentation at Agile2009.

In sharp contrast to the FIRST principles of good unit tests, Rady and Coffin give us these properties of completely bad (scummy) unit tests.

While we could list other unwanted qualities of tests, these seem to describe the most painful sins.