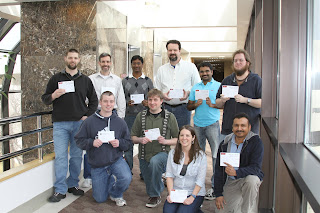 
Say hello to the team from Sum Total. Back before acquisition, the company was known as GeoLearning, and Tim was one of the coaches to help with their transition to Agile methods. Later, while working on Agile In A Flash, Jeff and Tim were both employed as remote pair-programming team members. The team has done some remarkable things in just the past three years.

Vadim (an excellent developer, brilliant guy, friend) reminds me that he is present in this photo as a reflection in the eyes of all the developers who are standing in front of the camera. If this were a TV detective show, you could zoom in and see him clearly.