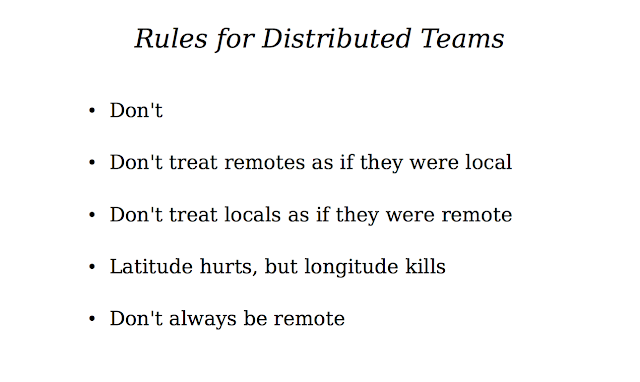 As the Greatest Agile-In-A-Flash Card Wielding Coaches So Far(tm), we're often asked for advice (or drawn into arguments) about how to make agile work with distributed teams. Sometimes it's for more humble reasons, though: We've both been remote members of a team, pair-programming with peers daily. We prescribe the following rules for distributed development:
Tim: Would I remote again? In fact, I do most of my Industrial Logic work remote. We are in constant touch with each other and pair frequently. I converse with Joshua Kerievsky more in the course of a week than I have any other "boss" (he'll hate that I used that word!) in my employment history. We even work across time zones. We would work more fluently and frequently side-by-side, but we'd probably not get to work together if we all had to relocate. It is a compromise that has surprisingly good return on investment for us. We also have the advantage that we are all mature agilists; it would be very hard for first-timers. It's hard for me, as I have a tendency to "go dark" sometimes.

Jeff: I enjoyed a year of remote development with a now-defunct company one time zone to the east. Pairing saved it for me. The ability to program daily in (virtually) close quarters with another sharp someone on the team helped me keep an essential connection with them. On the flip side, however, I never felt like I was a true part of that team. I missed out on key conversations away from the camera, and I felt that debating things over the phone was intensely ineffective. You do what you must, but I'd prefer to not be remote again.