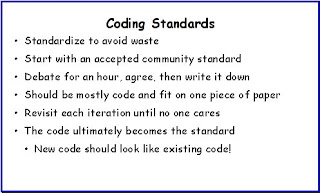 You do. You are talking about coding standards when you see someone has their tabs set wrong, when you complain about bracing, when you ask someone why they put their spaces where they do, when you add comments and someone else says delete them, ...

The need for a common style guide was glossed over in Collective Code Ownership, in the following paragraph:

So what kind of document is the code standard? The authors have seen plenty of large, complex, detailed guides that strive to be comprehensive. Who has the time? Perhaps the answer should be to look for the least documentation one can afford. How much is too much? How much is too little?

The first recommendation is that a team should standardize to avoid waste. In this case, "waste" includes rework, arguments, and work stops while issues are settled. In this regard, it is better to have even a bad decision than a variety of opinions. If we find that we are enduring waste, then we add a line to the standard. Again, we have to build collective ownership and any choice is better than arguing the same points repeatedly.

The team should start with an accepted community standard if one can be found. If there are multiple, choose one of them. For the python community, PEP 8 is a wonderful starting point. One may look at a ubiquitous tool's default styling as a community standard (community of tool users), since it seldom pays to to fight your tools. Notice that public style guides tend not to be the smallest document one can afford, but the goal is really to make development time productive and non-contentious (with regard to silly issues) so even a longer document may be successful.

If there is some particular contentious difference of opinion, then the team should time-box the argument. They might choose to debate for an hour, agree, and write it down. Some teams don't time-box the argument, and others do not reach resolution. Do not let contentious issues remain, or they will remain contentious. Once agreed and recorded, the issue should not be revisited. Nor should a pair partner allow his partner to spend iteration time arguing over decisions already made. Nobody has to love the decision, but they should admit to a fight well fought and a final answer that should not get in the way of getting real work done well and often.

Ideally, the standard should be minuscule. A standard-by-example will have a better chance of being concise and obvious. Therefore, the standard should be mostly code and fit on one page. This is especially true of the initial version of the team's style guide. To some degree, arguments and uncertainty will lead to the accumulation of additional guidelines but it is wise to start small. Our working documents should be like our code in the sense that it is as small, simple, and unambiguous as possible.

The style guide is an agile artifact. it is subject to corrective steering. A team should revisit the standard every iteration until no one cares any more. Iteration time is too valuable for these arguments, but retrospective time exists to help the team eliminate waste and turbulence. If further discussion of style points will help smooth the coming iteration, then it should be brought up.

The rule for simplifying any system is to obviate and then remove steps, processes, and instructions. If the code is written to standard, then the code ultimately becomes the standard and the standard becomes redundant. It is perfectly reasonable for a mature team to discard their documented style guide and keep the style. You will know the style guide is unnecessary when all new code looks like the existing code. And it all looks good.