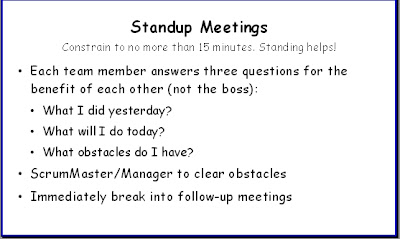 The very existence of "agile in a flash" reference cards might suggest that you can be agile if you just check off all the items on the cards. Nothing could be further from the truth. If you treat agile as a checklist process, you will probably not succeed with it. These cards are gentle reminders and guidelines, not absolute prescriptions and rules that can't ever be broken.

This card on stand-ups is a classic example. I can't remember how many times people have told me that they stopped doing stand-ups because they seemed such a waste of time. Lots of times, absolutely. The meetings were getting too long, and they were tedious.

Well, sometimes you do just want to follow the rules. Or at least, you don't want to break the rules until you understand why they exist. Stand-ups that go on too long aren't usually stand-ups, they're sit-downs (and thus break the rules). Once people get seated, they often have a tough time getting up off their rear end. We're here, we're comfortable, let's just dig into all these issues.

Stand-ups, as Ron Jeffries once remarked on one of the many lists he frequents (onto which he has probably posted over 100,000 messages, and so I'm not about to go try and find the message), are a bare minimum for daily conversation between a team. A stand-up isn't intended to capture all group conversations that should occur during the day. It's a starting point, to see who's there, and find out who you need to talk to later.

I've blogged a few times about how tedious stand-ups are often a direct result of avoiding collaborative work. In addition to a throw-it-over-the-wall mentality (BA->dev->QA), developers work in silos: You do that story, I do mine. There's little reason for us to talk to each other. The only people who really care much about what you're working on are you and the project manager. I care only enough to make sure you're not dragging us all down. Otherwise I'm not really listening to what you have to say during the stand-up; I'm figuring out what I'm going to say and trying to think about how to make it sound clever.

Don't work that way. Find a way to work as a team and collaborate on stories, and look to deliver a new story every day or two if you can. (And don't make excuses why you can't get it to a day or two, but instead keep trying to move in that direction.) Your stand-ups will become far more interesting!