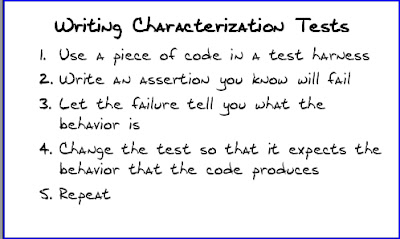 Test-after development (TAD) is tough; dependencies and non-cohesive code can make for a significant challenge. That's why Michael Feathers' book Working Effectively With Legacy Code is so useful.

Does working with legacy code really require a different set of skills than doing TDD? Well, sprout method and sprout class are the first avenues you should always explore, and they are strictly about test-driving the new code. But most of the other WELC techniques require less test driving and more digging about, trying different things. Some of the techniques even border on being too clever--they're about problem solving, and you do what you gotta do!

An important step in modifying existing code is understanding what it does before you make any changes. Feathers says characterization tests are like putting a vise around code: You want to pin it down before you attempt changing it, so that you know if it slips a bit when you do. So in a sense, we are back to test-first.

How many characterization tests do you need to write? You can read the WELC chapter on effects analysis, and start to get scared that you're going to have to write a lot of tests. Or you can use confidence as a guideline, writing as many tests as you think you need to understand the code you're about to change.

The flash card describes what are pretty obvious steps, but they back one of the underlying themes in Feathers' book: be methodical, be safe.