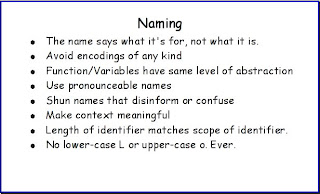 Want a challenge? Take a nice. long paper you've had around for years, expand it into a chapter in a book and then try to fit it on a flashcard. Flash cards are like poetry. You have to cut the material down to the smallest and most poignant form you can so that it is memorable and sparks memories in the psyche of the reader. I'm hoping that this one doesn't find me a poor poet.


The name says what it is for, not what it is. Poor names tend to say nothing, or the wrong thing. Take the variable 'x' for example. How about psz? I hope it's a pointer to a zero-terminated string, but I can't bet on it and have no idea what it is for. The English word for one piece of automobile safety equipment is "windshield". I'm told that the Japanese name for the same device is "front glass". In variables, we lean toward "windshield" and away from "front glass" if we want our code to make sense to our peers.


Avoid encodings of any kind. Psz (from above) encodes type enformation. IDoldrum contains an encoding "wart". Psz_agey may be a string containing a person's age in years, but that's not obvious. The example from paper and book is "gen_ymdhms". These encodings can be learned, and having been learned they join the other pile of pointless minutae in the reader's mind, but that's not a good reason to use them, no more than I should pinch your arm just because I know you'll heal. We write names to make code obvious and clear.


Functions and variables have the same level of abstraction. For this reason, in a Person class, we expect fullName, birthDate, address. We don't really expect stringDict or autoPtrArray to be part of a person.


Use pronounceable names. Most people read text with their innervoice, so a pronounceable name keeps them from say "blah-blah-blah" mentally (leading to errors). It is also much easier to collaborate with a pair partner if you can actually pronounce the names of the symbols you're manipulating. Finally, you can explain the program to new partners, bosses, or the like if you have pronounceable names. Names exist to communicate. Don't hamstring them.


Shun names that disinform or confuse. Don't call something 'list' if it is not a list. (Even if it is a list, don't call it 'list' but that's covered elsewhere in this list.) Avoid calling a variable 'ram' or 'mem'. Don't call your internal integer a 'socket' unless it is a socket. Don't use 'iSomething' for non-interfaces. If you use a name that causes a peer to misunderstand your code, take it as a coding error and fix it. Renames are cheap.


Make context meaningful. Don't add gratuitous warts at the front or back of your names. Especially the fronts. If everything in your application is named with the prefix 'app_' then you are causing people to look into the middles of names to find meaning in the name. Likewise, the dotted-names common in object-oriented code should have meaning in their context (person.age() v. person.session()). If a variable name is out of place in its namespace, class, or module then perhaps it is because it is in the wrong place.


Length of identifier matches scope. For a local variable in an anonymous one-line function, x, y, z, i, j, k are all fine variable names. For a variable in a 12-line function it is insufficient. For a parameter to a function call it is wholly in appropriate. As class names or module names, these are insanely poor choices. A global variable with a short name is an abomination on so many levels. This rule was gleaned from James Grenning, and I think it should have been in my original paper. It's a good rule.


No lower-case L or upper-case o, ever. 1t should be pretty Obvious that nob0dy shou1d ever cause others to confuse the letters 1 and 0 with the numbers l and O. It obviously is okay for you to use L in names like oldName and capital O in something like Organize but it is an act of purest naming evil to have a name that consists only of l and O.  It doesn't take a genius to see the confusion in "return l - 12 > O;"