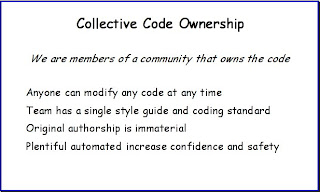 See Extreme Programming's writeup on the rule of collective ownership.

Next to pairing, the Agile practice that causes consternation among developers is the idea of collective code ownership. It is not a difficult concept to grasp, but individual ownership is a difficult idea to let go. Developers inclined or acclimated to working solo find this four-bullet card quite threatening, and the motto above it positively chilling.

It's not ours. It really belongs to the customer or company the second it rolls off our fingers. It won't follow us home, and we can't take it with us when we leave. It is copyrighted by the company as a work for hire. Let's not lose sight of that nugget of reality.

Anyone can modify any code at any time so that nobody has to seek permission to simplify and speed the code, or to add features that might touch code they don't own. Tests can be written because code can be made testable. This frees the development team from fear of a certain variety of personal conflict getting in the way of getting real work tested and delivered.

Original authorship is immaterial because "it's my code" has never been a valid reason to avoid improving or modifying a system that doesn't work or which doesn't do enough. In agile teams, we try not to talk about the original author when we are working on code. It simply is. It had an original intent, and we hope to strengthen it and make it more clear. The code exists and works. We want it to work better. This focus on the behavior of the code over the personality of the author is freeing as well. We can learn together once we let the guards down.

Plentiful automated tests increase confidence and safety so that we can learn while coding. If code is test-driven, every violation of the original intent (as expressed in the tests) is met with a test failure. Rather than pre-worrying every possible code change, the developer pair can make progress in short order and can refactor without fear. This is better for the company, better for the programming pair, better for the individual.

Reading over this card, I wonder if we missed the more important point that work does not have to queue for individuals. Too often we find work piled up for one or two siloed developers while two more are nearly idle because their silos are not busy. This is inevitable when our team structure involves multiple queues, and it is a shame. If we broke down the silos and followed pairing, testing, and collective ownership practices for just a little while we would find ourselves in a situation where any number of developers would be able to pick up the jobs that are waiting.

Scenario 1: Fred can produce automated filing reports in a day. Abe and Margaret together could get it done in two and a half days.. It makes sense to have Fred do this work, yes? But it's Wednesday, the work is due Friday, and Fred has 16 hours of more important work that is also queued for him. Now it seems foolish to assign Fred, because it will cause us to miss a release or else Fred will work copious overtime while Abe and Margaret go to the bar at 3:30pm. A good deal for Abe and Margaret, bad for Fred and risky for the company.

Scenario 2: Fred has three days of work to get done, and only two days to complete it. Nobody else can help, because Fred has always maintained this system alone. His wife calls to tell him that their newborn has pneumonia. Should he work late and fail as a father, or go home and fail as an employee?*

Scenario 3: Abe and Margaret already have worked with Fred in the automated filing area many times over the past three months, and feel pretty comfortable there. There are a lot of tests, and these tests help them to avoid checking mistakes into the code line. Fred has three days of work to be done, and a new two-day assignment was added to the pile. Margaret feels pretty comfortable with the new work, and should be done in two days. Fred and Abe team up on the remaining work, and at the end of the slightly-longer-than-usual day they're half-done. They should be able to finish up tomorrow. Fred's had bad Thai food. He begs off and dashes home. Charlie comes in to pair with Abe and Margaret as needed so that the release can finish on time.

This is an argument not only that a team should pair and explore the project's code, but also that they should be doing so at all times. The team should always be able to cover for members who are incovenienced by family emergencies or personal illness.

It won't work in a shared trunk/branch. It does, all the time. The developers will share code more often, which means that they will integrate changes into their branches sooner rather than later. By sharing more, they have smaller and simpler integrations. I

It doesn't work in the face of refactoring and renaming code. You would think, yet somehow it still does. Common code and frequent integration make this largely a non-issue. And if people must work in the same small area of code, they can locate closer together and talk over their changes on-the-fly to make integration easier yet.

It will be hard to get any design done. A team does settle into shared design with surprisingly little thrash. The idea that good design is the work of a single enlightened individual and that it cannot be understood or appreciated by his peers is largely unsupported. An incremental project does small acts of design all of the time, and often hold impromptu stand-up meetings to talk over changes that impact the system on a larger scale.

You can't really get people to do it. However unlikely it seems, many work precisely this way each day. More surprisingly, people come to truly love the flexibility and expanded influence that collective code ownership gives them. This is particularly true in agile shops where they practice pair programming and unit testing.

*Rhetorical question. You always choose the child. Of course, you may still face dire consequences at the job. Personally, I would hate to be the manager who has to tell clients that he can't make the release date because he only has one programmer competent to do the work. Who should really be in trouble here?